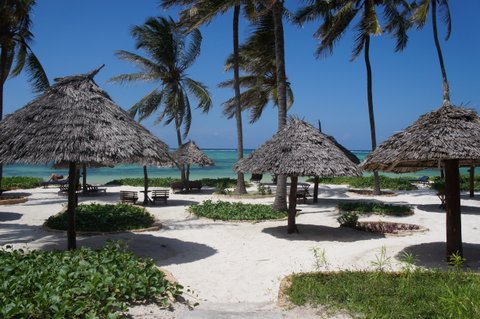 Greetings from highest Africa! That is, from a jet; we are returning from Zanzibar to Johannesburg, flying over Mozambique mountains that peak through clouds, large lakes, and meandering rivers (probably filled with crocs). It looks like fertile exploration ground for a future trip. But for now we are excited about Zanzibar where we have just spent a few beautiful days, exploring Stone Town, the countryside and it’s paradisiac seaside with some of the most beautiful beaches and azure waters anywhere. We were inspecting boutique hotels and lodges for the Commendable Collection and putting together a program for a small group for February 2013, as well as for independent travellers seeking our aid. Zanzibar is a spectacular and lush tropical island set in pale aqua waters, but that is not all. Unlike so many islands designed only for lazing, this one is fascinating. Its history is intertwined with the Sultans of Oman, harems, Arab Princesses, merchants from India, colonisers from Portugal, Germany and England, greedy Slave Traders, English explorers, like Stanley and Livingstone, and the Spice trade, all making a spicy mix indeed. Zanzibar was already a thriving commercial centre in the middle ages and flourished in the 18th and 19th centuries.

Seyyid Said bin Sultan, the 19th-century sultan of Oman, made Zanzibar his home and the capital of the Omani Empire in the early 1800’s He built magnificent palaces in and outside Stone Town and instilled Muslim traditions, while the clove, ivory, and slave trades made Zanzibar rich.

Stone Town, as the Capital city and also an Unesco World Heritage site, is definitely worth a visit. Its architecture dates back to before middle ages (it s earliest visitors came in 150 AD), when its Swahili civilisation  merged with visiting traders and pirates from India, Arabia, Persia and China, criss-crossing the Indian Ocean, bringing metal tools, weapons, and jewellery, and departing with heart-breaking quantities of ivory tusks, tortoise shell, and captured human cargo to be sold as slaves. Zanzibar’s name is derived from the Arab Zinj el Barr, or “Land of Black People”. The African people of the coast intermixed with the visitors creating a distinct Swahili society of language arts, and culture. Swahili is today’s official language.

Stone Town reflects this mixture of cultures. Stroll its rather chaotic streets, and see coral and stone houses, with intricately carved wooden doors with script from the Quran, and others studded with pointed brass from India, historically used to fend off elephants. Internal courtyards, and high balconies were part of the Arab tradition.

In Stone Town we received a wonderfully warm welcome at Jafferji House, a recently restored boutique hotel that is deliciously romantic, yet luxurious, taking us back to the 1001 Arabian nights, with antique Sultan’s beds, sensual reds, oranges, and earth colours on its plastered walls, mahogany carvings, brass lanterns internal courtyards, and exotic bathrooms with large sunken tubs. The owner, Javid Jafferji, is a famous photographer and his photographs offer an artistic and anthropologic lesson. We stayed in the bedroom named for Princess Salme, the daughter of Seyyis Said, which delighted us, as we had just finished reading an excellent account of the history of Zanzibar, The Sultan’s Shadow,  by Christiane Bird, in which her fascinating and somewhat tragic story featured significantly. If you want an authentic Zanzibar experience, this is the place.
Then we were spoiled royally at three magnificent beach-side resorts, Breezes, Bazara and The Palms, all part of the "Zanzibar Collection". Our time was spent strolling indolently along beaches of fine white powdered sand, and enjoying spas suitable for Sultans. We also visited a local village, its children, and its schools, a , mangrove swamp, and a rare habitat of red Colobus Monkeys who delighted us at close range. 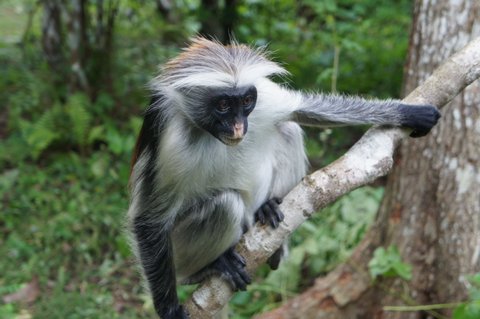 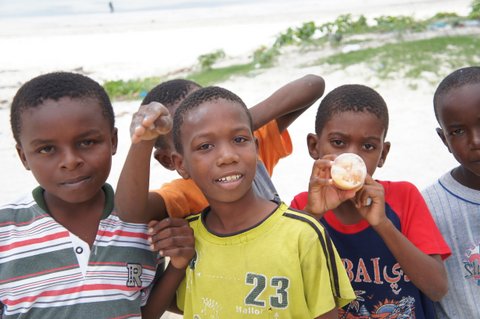 On arrival at Breezes we were offered a fresh coconut to sip with a straw, and were led to see the beach, which is beautiful indeed, but so was the surprise that awaited us. Under a palm frond canopied table set for lunch just some meters from the sea, we sat with our feet in the sand and feasted on fresh grilled fish and lobster and perfectly chilled white wine.

Zanzibar Cuisine: Throughout our stay, we were delighted by the abundant seafood and fresh local fruits, blended with the pungent perfumes of Zanzibar’s famed spices, amongst them clove, ginger, cardamom, lemon-grass, punctuated with the flavour of fresh coconut milk and curry. Lobster in Zanzibar is plentiful and served grilled in the company of prawns and local fish, but we were treated to a cooking lesson by Chef Alan of the Bazara Lodge and learned his recipe for Bahari Lobster, i.e. Zanzibar style. After we watched, we lunched by the sea on this local lobster sautéed with cumin, ginger, julienne of courgette, and blended with fresh coriander and coconut milk. It was served with spicy Zanzibar rice and accompanied by crisp South African Sauvignon Blanc. This was definitely a 10 out of 10 experience. 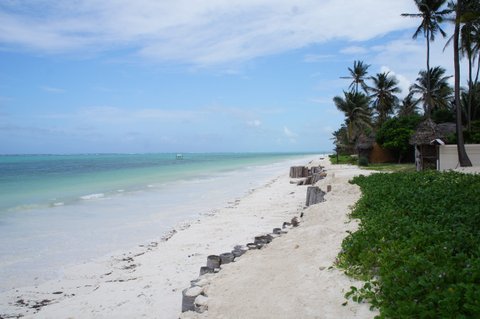