I Love Paris in the Winter……….

Paris simply thrills, whether you are a first time visitor, or you have lived here a lifetime. We have arrived on a cold night in January, this time staying on the Ile St. Louis, which has a timeless neighborhood feel and is a stroll away from the little bridge that leads to the Cathedral of Notre Dame on the neighboring Ile de la Cité. I cannot imagine anything more beautiful than the intricate stone tracery of  those flying buttresses, set off, lace-like against the  blue-black night. Or I could not until I entered. No matter what your beliefs, the Cathedral is breath-takingly glorious, and the combination of its soaring arches,  massive monumental columns in the chiaroscuro of candlelight, the wavering perfume of incense, and the voices of a choir, is an evocative experience not to be missed.

When Vernon Duke composed "April in Paris" in 1932, he chose not to call it "January in Paris". But while January may not be the acclaimed time to be in Paris, it is still wonderful. Paris charms and seduces at any time of the year. And in January, the bistros seem cozier, the Museum Expositions more irresistible, and the oysters are in season. And besides, its when they have the best sales! If you are a shopper you won’t want to miss out.

While France, in a gesture of Franco-American solidarity, has just lost its Triple A rating at one of those fine rating agencies that were so prescient about the financial crisis that they helped precipitate, no evidence of the consequences are immediately visible. There is still an accordionist playing "La Mer" at the bridge connecting the Ile St.Louis to the Ile de la Cité, the Louvre is still packed with visitors, the restaurants are still serving delicious food, and Carla Bruni is still feeding her baby at the Elysée Palace.

With the French Presidential election only 4 months away, politics is in the air and on the air, but for a visitor to Paris, it is possible to be unaware of all of that. What you cannot be unaware of is the cornucopia of culture available in this city. Whatever your interest, and whatever your French language skills, Paris has something fascinating for you. From museums devoted to even the most arcane activities, to performances of every kind of art, Paris doesn’t just have it, it flaunts it. And this is January ! Exhibitions at the Grand Palais alone currently include (i) the fascinating exhibition devoted to Gertrude Stein’s and her brothers’ influence and relationship with the great painters of her period, with many works of the likes of Matisse, Picasso and Cezanne on display, (ii) La France en Relief – From Louis XIV to Napoléon III – Relief maps and models of fortified towns were produced for military purposes from the reign of Louis XIV to the end of 19th century. These incredible objects of quality and size shed light on a range of historical phenomena, including the development and setting of borders, siege warfare and fortifications, map-making, and the transformation of the town planning and the landscape, (iii) Hair & Science – Hair is at the same time familiar and mysterious, revealing its secrets and multiple facets in this exhibition. These are followed by further fascinating events over the coming months. At the Louvre, in addition to its unsurpassed permanent collections, special exhibitions include (i) Georgio Vasari – Drawings from the Louvre – to mark the fifth centenary of his birth, the Louvre pays tribute to Giorgio Vasari, Italian painter, architect, and writer, with an exhibition of the finest of his drawings in the museum’s collection, (ii) Fantin-Latour, Manet, Baudelaire: the Hommage à Delacroix – It was 1863, a seminal moment in the history of art in France: the year Manet sparked a scandal with his Déjeuner sur l’Herbe, and the year of Delacroix’s death. Shocked by the lack of official recognition, for the next Salon, Fantin-Latour created his Hommage à Delacroix. At the Musée d’Orsay, special exhibitions include Degas and the Nude and Imressionism and Fashion.

This is the tip of Paris’ cultural iceberg. We cannot spend too much of our time investigating the iceberg further as we have been adding to the Commendable Rental’s portfolio of Paris properties. Andelightful addition is an exceptional property in the 7th arrondissement, a penthouse we have christened, l’Orchidée. It’s close to Les Invalides, and a stroll from the Eiffel Tower. On the 7th floor of an elegant 1932 building, this apartment has balconies over a wide boulevard with a close up view of Les Invalides itself, and a distant view of Sacre Coeur on Montmartre. It is wonderfully decorated, with quality furnishings, refined taste, and stunning modern art. It offers impressive principal rooms with picture windows on both sides, two gorgeous large bedrooms with elegant bathrooms, and an open plan kitchen to die for.

Also,a wonderfully cosy apartment at Le Marais, we’ve called Le Rose Violet. Just two minutes from the magnificent Place des Vosges, this is a charming and attractive romantic hideaway with a library/study that is so comfortable that it might keep you there reading instead of seeing the attractions of Paris.

As the charms of winter give way to the glories of spring, and as the chestnuts begin to blossom, and asparagus fills the markets, so do the Paris activities reach full flower. Vernon Duke’s song will soon be timely. Stay tuned, we will keep you up to date. 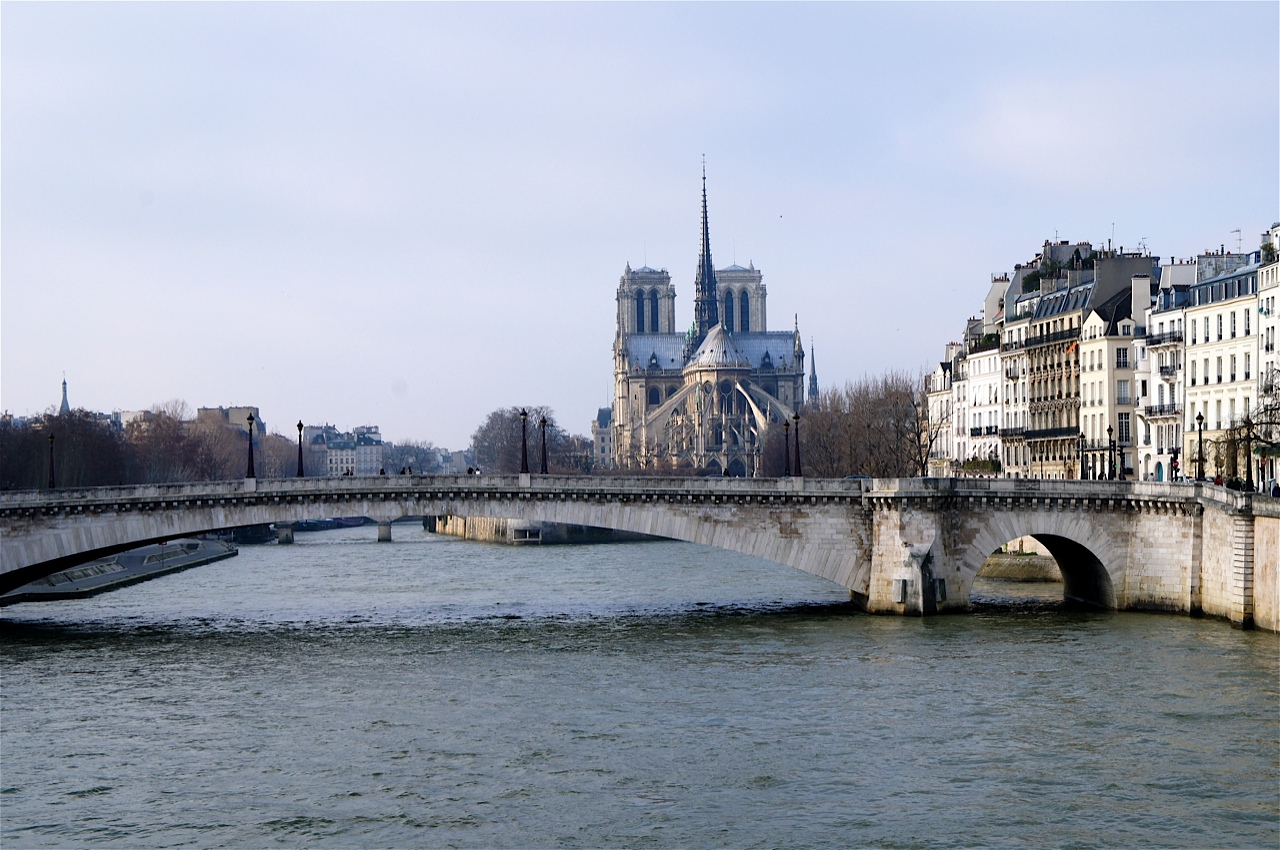